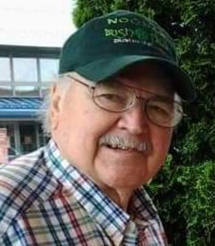 Thomas M. Noonan Jr., 87 years old, passed away on February 2, 2020 at home with his family. He was a graduate of Flaget High School in Louisville, KY. Tom worked for 40 years at Standard Gravure and 17 years at McDonalds. He was a member of the Florence VFW, the American legion, and he was a Kentucky Colonel. He served in the U.S. Army and he was stationed in Germany during the German occupation.

Thomas was preceded in death by his parents, Lorena and Thomas Noonan Sr.; his daughter, Cynthia “Cindy” Mahaffey; and his sister-in-law, Theresa Noonan. He is survived by his beloved wife of 41 years, Joanna Noonan nee Cooksey; his children, Thomas Noonan III, Lisa Noonan Grady (Tim), Jackie King Etheridge (Sidney), and Melanee King; his brother, Gene Noonan, and many nieces and nephews. Tom also leaves behind his 11 grandchildren and 18 great-grandchildren.

Tom generously donated his body to UC Medical Center so there will be no graveside service. Mass will be on Thursday, February 6, 2020 at 10:00AM at St. Henry Church in Erlanger, KY. A second mass will be at Our Lady of Mt. Carmel in Louisville Saturday, February 8, 2020 at 10:00AM. He was very proud of his Irish heritage, his love of the race horses, and his pinochle group. Memorial contributions to: Hospice Care of St. Elizabeth 1 Medical Village Dr. Edgewood, KY 41017 or NAMI-Northern Kentucky / National Alliance of Mental Illness address please put 303 Court Street #707 Covington, Ky 41011. Online condolences to: www.linnemannfuneralhomes.com.

He was a much loved man

Tom was an inspiration to me of how accepting he was to me in the short time I was in his life. He was instrumental to the success of my daughter Lindsey, for that I say thank you Tom!