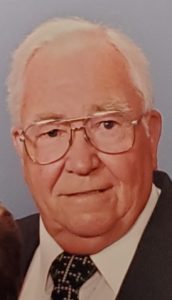 Lou was born to Charles and Glenna Edgington in southwestern Ohio on December 3, 1928 and raised in the surrounding area.  He graduated from Seven Mile High School and worked on farms while in school and during the summer months. Shortly thereafter, Lou enlisted in the army where he was both a soldier and a tuba player in his battalion marching band. After completing his military service in the late 1940’s, Lou met Geneva Moore at a dance.  They hit it off instantly, and were later married on June 29, 1951.

Shortly thereafter, he started an apprenticeship in the printing profession, which became the foundation for the rest of his work life. In the late 1950’s, he worked for The National Cash Register Company and rose up the ladder in two of their Ohio manufacturing plants. In 1968, Lou took a risk and accepted a management position with a printing company in central New Jersey, and the family moved east. Just as he settled into this new position, he opted to leave one year later to become the first employee of a new printing company, Webcraft Packaging. He led the start-up efforts of three manufacturing plants over seven years while the company prospered and grew rapidly. During these years, Lou recruited numerous other colleagues from NCR in Ohio to relocate to New Jersey and further their careers. It was also during this time that he earned the nickname “Big Daddy,” given to him by the many employees who worked long hours just as he did to see the company flourish.  He will forever be remembered as the guy who cooked and served bacon and egg sandwiches every Saturday to the employees as a token of his gratitude for their constant hard work.

Next, he took a leave of absence and returned to his southern Ohio roots to try his hand at big time farming.  He and Geneva bought a 320 acre farm and grew several commodity crops.  It was hard work, often dawn to dusk, and consistent with his strong work ethic to achieve success.  These were challenging years, but ones he never regretted.  Realizing that printing was still very much in his blood, he returned to Webcraft and served in management and advisory roles. He concluded his printing career in leadership and consulting roles at several other companies, working into his seventies.

Throughout his adult life, Lou thoroughly enjoyed playing card games with family and friends, often late into the night. He loved to play golf and was a dedicated fan of the Cincinnati Reds and Ohio State football and basketball. In retirement, Lou became an avid reader of books and greatly enjoyed working on jigsaw puzzles. He also loved listening to music from the Big Band era and from artists of the 50’s and 60’s.

A private memorial service will be held at a later date.