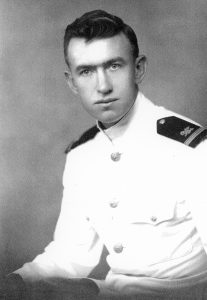 Born April 9, 1925, A bona fide member of The Greatest Generation passed away March 24, 2020. Fred was a WWII Veteran having served in the Pacific Ocean Combat Theater in the Philippines. Fred was a native of Ludlow, KY, and graduate of Ludlow High School. Fred was Class President, Salutatorian, and an accomplished athlete, inducted into the Ludlow High School Hall of Fame. Fred lettered in basketball, football, and track. During his tenure he set several records in the mile and half-mile. He was deservedly selected as one of eleven players on the 1942 Coaches of Northern Kentucky Allstar Team. Fred was a graduate of Miami University of Ohio. As a member of the Navy Officer Training Program, Fred earned his Marketing degree in an accelerated program designed to rapidly prepare and deploy Officers for the war effort. Fred married his pretty Irish high school sweetheart, Mary K. Gleason, and after the war, he returned to Ludlow with Mary and taught at Ludlow High School for several years. Fred had a number of jobs in marketing and distribution and owned an ice cream truck sales business before going to work for the US Postal Service sorting mail in train cars between Cincinnati and Nashville. Fred retired as a Supervisor with the Old U.S. Postal Transportation System headquartered in Cincinnati. Fred remained in service to the nation for almost 30 years in the Naval Reserves. He was the Supply Officer at the Old Naval Training Center on Third Street in Covington, KY, responsible for payroll, uniforms, supplies, and he outfitted and coordinated the recreational activates for hundreds of recruits during the Korean and Vietnam conflicts. Fred believed in military and community service. Fred was a charter member and past President of the Ludlow Vets, organized the first Cub Scout Pack in Crescent Springs, helped organize and served as the first President of the Dixie Heights High School Boosters Club, was a life member of VFW Post 6423 in Erlanger, and the Lieutenant Commander donned his uniform every year and marched in the Ludlow Memorial Day Parade until he was no longer physically capable. He was also a long-time member of Lakeside Presbyterian Church. In his later years Fred got a kick out of browsing the internet, keeping up with his Face Book account, studying the stock market, and compiling the genealogy of his Padgett descendants that settled in Pulaski County, KY. Fred was preceded in death by parents, Fred and Mable Padgett, his only brother, Air Force Pilot Lt. Kenneth Dow Padgett was killed in service during the Korean War, youngest son Timothy Padgett died at the tender age of 17 in an automobile accident, and his loving wife of 58 years and mother of his children, Mary K. Padgett. Fred is survived by sons, Fred T. Padgett, Mark (Linda) Padgett, Kenneth P. (Marilyn) Padgett, Grandchildren, Jennifer Weber, Mark S. Padgett, Jr., Kenneth P. Padgett II, and great granddaughter, Avery Weber. A graveside service will be held on Saturday, March 28, 2020 at 12pm at Forest Lawn Memorial Park Cemetery located in Erlanger, KY with Military Honors to follow. Memorial contributions can be made to the Salvation Army, P.O. Box 14189, Cincinnati, OH 45250-0139.

I watch the obits daily to see how our residents are faring during my absence from Village Care Center. I was sorry to find your dad listed there, but the tribute you gave him was inspiring. You boys have taken such good care of him in his last few months making his days seem less long and entertaining him with your wit. You gave back to him what he gave to so many people’s lives he touched. And what a colorful life of service he had. How someone can accomplish so much in their lifetime is just amazing. They are called the Great Generation for much more than their participation in WWII. Your dad can rest in peace knowing the children he raised are fulfilling the Padgett name.
Respectfully,
Nancy Naber