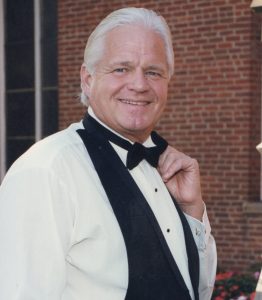 James Hoyt “Jim” Weiss, 87, died peacefully on Friday May 27th at home with his wife and children by his side. Jim was born on February 3rd, 1935 in Akron, Ohio and was son of the late Hoyt and Ora Mae Weiss. He is survived by his devoted spouse of 64 years, Sally Pettit Weiss and his children, Jim (Amy) Weiss, Jon (Tina) Weiss, Teresa (Michael) Hassara, Joe Weiss, and Diane (Tony) Werner. He is also survived by his cherished sister, Linda (David) Warder, 19 grandchildren and spouses, 2 great grandchildren and dozens of beloved nieces and nephews. Jim was predeceased by his brothers, William and Robert Weiss and his sister Dorothy (Bud) Clayton. He graduated from the University of Akron in 1958 with a degree in Education. Jim put himself through college working “on the squad” at Goodyear Tire & Rubber Company and played both football and basketball for the Zips.  At UA he joined Phi Delta Theta and the ROTC where he formed friendships that lasted his lifetime.  On June 7th, 1958 he married Sally, a teacher, his junior high school sweetheart and the love of his life.  After college he served his country as a First Lieutenant in the US Army, taught high school history and worked at Prudential Insurance before joining Brennan and Howard of Akron, Ohio where he worked for the remainder of his career. Jim was a devoted spouse and loving father and grandfather. He lived his life with joy and loved deeply. With a magnetic smile, infectious wit, deep curiosity and love of conversation he lit up a room.  He made everyone he spoke with feel special and important. Jim was a fabulous storyteller, sometimes stretching the truth just a bit for everyone’s amusement. Over the course of his life he trekked across the country to attend hundreds of football, basketball, soccer, baseball, lacrosse, tennis, track, swimming, skiing, dance and rowing events to joyfully watch his kids and grandchildren compete (regardless of how good they were!) He was an avid sports fan with a late in life love for the Boston Red Sox and professional golf. Not one to ever sit still he loved to travel, fish, golf and play highly competitive cards with family and friends and was an accomplished furniture builder.  After retirement he took up gardening with his wife and together they created beautiful outdoor spaces where they hosted many gatherings and enjoyed their end of day glass of wine.  Jim also spent many happy summers on Cape Cod with Sally where he walked the beach, enjoyed a cigar in the cool evening breeze, and played a mean game of cornhole. As members of Christ Church for many years, Jim was a handsome Beefeater in the Boar’s Head service and together, Jim and Sally served on numerous committees. A memorial service will be held for Jim on Sunday, July 24, 2022 at 12:30PM at the Ohio Prestwick Country Club, 3751 Glen Eagles Boulevard, Uniontown, OH 44685. A memorial lunch will be held immediately following the service and if you would like to join, please RSVP to (978)505-1911 before July, 20th. In lieu of flowers donations can be made in memory of James H. Weiss to the Alzheimer’s Association at www.ALZ.org. The family is deeply grateful to the skilled and loving caregivers at Storypoint Senior Living in Union, Kentucky.  With their support and kindness, Jim lived his final year in joy and was treated with dignity and respect.

The Military Officers Association of America (MOAA) recognizes the service of James Hoyt Weiss in supporting the ideals of the United States.
Military service requires long hours and separation from family and friends. We salute him and his family for his service.