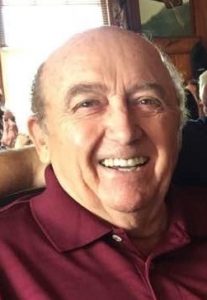 James “Jim” Edward Wilson, 79, passed away Friday, February 19, 2021, at St Elizabeth Medical Center in Edgewood, KY. Jim grew up in Cincinnati and Newport, spending his summers fishing and hunting with his relatives on their farms in Owsley County, Ky. Graduating Newport High School in 1960. There he developed his love of cars and boats. During the summers he liked to ski. After graduating High School he enlisted in the Army to get his time served completed, much against the approval of his mother Amanda. He reported to Fort Knox for his training. During his time he was assigned to Taiwan. He met his wife Patricia and married in 1964. He was Honorable discharged in 1966. Started working at US Steel in Cincinnati Ohio as an inside salesperson, which lasted 18 years. Their only son James was born in 1967. He was very proud to be able to build his Father and Mother’s home in Burlington, KY, that they had saved so long for but could not get a builder under contract. In an effort to provide for his family, he acquired rental homes in Covington, Ludlow, and Erlanger. In 1984, he accepted a position with Andrew’s wire, based out of South Carolina, as an outside salesperson to build on his experience. He joined Gloria Dei Lutheran Church. Sharing his love of cars with his son James, they would go to the corvette shows in Bowling green together. In 1990, He started his own company, Mid States Metals, selling steel. He enjoyed that he and his son could work the business together. Starting in 1994 thru 2000, Jonna, Kirsten, James, and Konnor, his grandchildren were born. He loved his grandchildren. Taking them to events, movies, and boating. During this time, Patricia and Jim traveled together, England, Scotland, and Ireland, and taking cruises on the Queen Mary II. He retired and decided he did not like retirement went back to work for Precision Metals Service, a stainless steel provider for 11 years, just retiring in 2020. He loved his wife Patricia very much. They recently celebrated 56 years of marriage. Preceded in death by his parents Ralph and Amanda Wilson and half-sister Raylene Marsh. Survivors include his wife Patricia Wilson, son Jim (Beth) Wilson, grandchildren Jonna, Kirsten, James, and Konnor and brother Glen (Sally) Wilson half-sister Paula Bilbo. On Friday, February 26th Visitation will be held 4:30 – 6:30 pm with a Service to follow at Gloria Dei Lutheran Church in Lakeside Park KY. On Saturday, February 27th 10am Linnemann Funeral Home (Erlanger) with a procession to Highland Cemetery in Ft Mitchell. Memorial contributions can be made to the American Heart Association 5211 Madison Rd, Cincinnati, OH 45227. Online condolences can be made at www.linnemannfuneralhomes.com

Our thoughts and prayers are with you all. God Bless and sincere thanks for his service to our country.

What a Great Man

Mr. Wilson (out of love and respect – could never call him by his first name – no matter how many times he said to) was a second father to me.
I have know Jimmy since the first grade, and have always been close to the Wilsons
As I started my own family and career and as life got busy. I didn’t see Mr. Wilson very often. But when I did, he had an uncanny knack of making it feel like you just spoke with him the day before.
He always way more interested in what was going on with my life and with my kids, than what was going on in his.
As I type this, I can hear his little chuckle and I can hear him calling me a “big turkey” – What a great man. He will be missed.