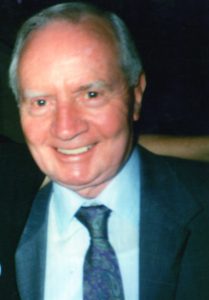 Jack Calvin Mitts, 93, passed away peaceably January 25, 2019, at his Florence, KY home surrounded by family and under the wonderful care of St. Elizabeth Hospice.  Jack was born on June 24, 1925 to the late Benjamin and Stella (Turner) Mitts.  He was a WWII Navy veteran and is a member of the American Legion Florence Boone Post 4.  Jack was a lifelong resident of Northern Kentucky having lived in Covington, Villa Hills, Edgewood, Dry Ridge, and Florence.  He served on the Villa Hills City Council and was past president of the Villa Hills Civic Club.   After a successful career in the Insurance business at Cotton Insurance Agency, in Dry Ridge, and with Western and Southern Insurance, Jack retired and enjoyed working part time at Hollywood Casino.  He enjoyed spending time with his family and friends and also had a story and smile for everyone he met.  Jack was preceded in death by his first wife of 32 years Jenny (Taylor) Mitts, second wife of 29 years Janie (Day) Mitts, grandson Timmy Alexander, sisters Marge Meyer, Clara Mitts, and brother Estill Mitts.  He is survived by his son Mark Mitts, daughter Kathy Alexander (James), granddaughters Lisa Parks (Terry), Kim Brown (Jon), grandson Christopher Alexander, great grandchildren Taylor Brown, Madison Brown, Timmy Brown, and Ryan Parks.  A visitation will be held on Saturday, February 2, 2019 from 10am until 12 noon at Linnemann Funeral Home in Erlanger, KY.  A funeral service will immediately follow the visitation and begin at 12 noon.  Interment will be at Mother of God Cemetery.  In lieu of flowers, memorial contributions can be sent to St. Elizabeth Hospice 483 South Loop Dr. Edgewood, KY 41017.  Online condolences can be made at www.linnemannfuneralhomes.com