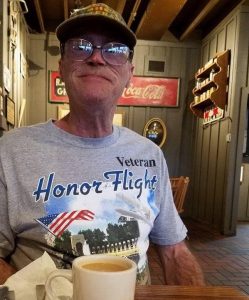 Eugene Terrel McKenney, Cincinnati, OH, went to be with the Lord on Sunday, March 1, 2020 at the age of 68. Mr. McKenney proudly served our country in the United States Army during the Vietnam War. He worked for Clow Welding and later worked as a self-employed contractor & welder upon retiring. Gene’s greatest joy and priority in life was his family. He was caring and nurturing to his friends and family, especially in their times of need. His faith was important to him as he was a member of Vineyard Church in Florence, KY. He was preceded in death by his father, Howard William McKenney, step mother Thelma McKenney and sister, Carolyn Gadker. Gene is survived by his loving daughters, Robine (Dennis) France, Michelle Dawn McKenney, Victoria (Robert) Baeumler and sister, Beverly (James) Groeschen. He also leaves behind 10 grandchildren and 5 great grandchildren. Visitation and services will be held at the convenience of the family along with burial and Military Honors. Memorial contributions can be made to the Wounded Warrior Project, P.O. Box 758516, Topeka, KS 66675-8516.

God bless you in your grief at Gene’s passing, he will be missed. Love and prayers.