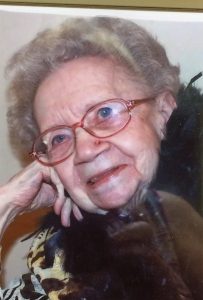 Esther Jane Alberta Penick (nee: Bennett),97, also known as; Mom, Sis, Alberta, Berta, Mrs. Penick, Aunt Berta, Mamaw and Mo, of Kenton County, KY passed from this life on Tuesday, February 11, 2020. She was a seamstress & tailor before retiring. Alberta was the daughter of the late Florence Leona  Bennett (née Petty) and Herman Vincent Bennett. She was pre-deceased by her three siblings, Catherine (Boots) Kruger and Chris and Bill Bennett. Alberta was married to Billie (William)Lamont Penick on June 16, 1951 in Covington, KY. They were married until his death on May 16, 1989. Their youngest son, Larry Lamont (Monty) Penick, followed him in death on April 8, 1998. Alberta is survived by her remaining two children, William (Bill) Edward Penick & Kathryn (Kathy) Deanna Hopkins (née Penick), and their spouses, Cynthia Ann Penick and Frank Kenneth Hopkins. Alberta also leaves behind her seven grandchildren; Christopher Spade, Mindy Mouser, David Hopkins, Mark Hopkins, Emily Ellis, Stacee Woods, and Carson Penick, as well as 8 great grandchildren; Justice, Kelsey, Lathen, Riley, Noah, Bowen, Becket and Charlotte. Visitation will be held on Tuesday, February 18, 2020 from 11:00am to 11:30am at Highland Cemetery Chapel, located in Ft. Mitchell, KY with services and entombment to follow. Memorial contributions can be made to Brookdale Hospice, 2621 Dryden Rd., Suite 204, Moraine, OH 45439

I am deeply saddened by Aunt Berta’s passing, but incredibly thankful at the same time for her life. She was one of the most generous people I have ever known, never hesitating to offer whatever was needed to help — not to mention the endless cup of coffee anytime I was in her house. I loved her dearly and will fondly remember her as a surrogate mom for all those summer weeks I spent in her home in my childhood. I will also treasure the intermittent drop-in visits during the years I lived and worked in Northern Kentucky. I want to give my heart-felt sympathy to Kathryn and Ken, and to Bill and Cindy, and to their families in this time of loss, adjustment, and all the processing that goes along with that. Much love, Bob and Kathy Bennett