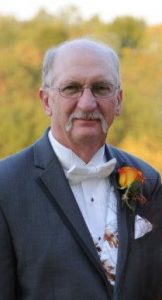 Clayton Whiteker, 62, of Morning View, KY, passed away peacefully on Tuesday, March 30, 2021 at his residence under the care of hospice and surrounded by his loving family. Clayton held numerous positions at R.A. Jones, where he worked for over 44 years. He was an avid outdoorsman who loved to hunt and fish with his family.

Clayton was preceded in death by his mother, Barbara Whiteker (nee Spaulding).

He is survived by his loving wife of 38 years, Linda Whiteker (nee Burkhart); his father, Don Whiteker; his daughters, Shonda (Adam) Leen and Nicole (Cort) Wayman; and his sister, Tammy (Bruce) Taylor.

He was a proud grandfather to his beloved grandchildren, Lily Lay, Charlie Wayman, Georgia Leen, and Mica Wayman, who were the joy of his life.

A graveside service for Clayton will take place on Monday, April 5, 2021 at 12:00PM at Independence Cemetery in Independence, KY.

To share a memory of Clayton or to offer your condolences, please visit www.linnemannfuneralhomes.com.

So saddened to hear of Clayton’s passing. I always enjoyed his friendship as a coworker. He was a true gentle soul. Rest peacefully, my friend.

Clayton was an awesome shooter!

I met Clayton at Northern Ky Straight Shooters. He shot trap with my husband, Ray, and me. He was a much better shooter than us! You could always count on Clayton to shoot on the men’s top team. Ray and Clayton can shoot trap together in heaven now! My prayers to Linda, Nicole and his entire family. – Evelyn Richard

Clayton was such a great guy!

I enjoyed not just working with Clayton, but also our great conversations we would have as I walked through the plant. He loved his family, especially his Grandchildren. He will be missed very much, not just as a co-worker, but as a family man. I was great to know you Clayton! Rest in Peach sir!

Heaven has gained another set of great wing,

Clayton is such a good man! Thank you for being such a great papaw to our grandchildren! You will be deeply missed by all. Rest In Peace.