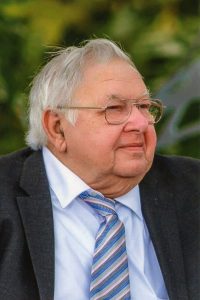 William “Bill” Thomas Goins, 83, of Florence, KY, passed away on Wednesday, January 27, 2021 after a long battle with many health issues.   In 1958 he married his high school sweetheart, Carol Lee Carter, and they spent 46 years together, raising their 5 children and spoiling their grandchildren until Carol passed away in 2004.  A few years later he met and married LaVerne Robinson, with whom he shared the last 10 years of his life.

For 27 years Bill worked as Draftsman for Litton Industries, designing commercial conveyer belt systems.  In his retirement he enjoyed woodworking, building small furniture pieces for family and friends.  He made cedar chests for his children, toy chests for grandchildren and the beautiful heirloom cradle that all his grandchildren and great grandchildren slept in during their first months of life.  Bill had a witty sense of humor and was always trying to make people laugh.  He would often be found “kibitzing” over a family game instead of just sitting down to play.  He enjoyed simple things in life, like always finding a “quaint” restaurant with great food to stop in on the way to vacation destinations, and taking his grandkids out for ice cream.  he loved attending sports events, concerts, school plays and dances for his grandchildren.  He enjoyed a good fishing trip and once caught a 8ft 8in, 45lb sailfish on a deep see fishing trip during a family vacation.  He was an avid UK basketball fan, he loved watching the games and was almost always seen sporting a UK baseball hat.  He also had a passion for US history and researching his own family history.  He would go on short trips throughout the state in search of tidbits of his family legacy, often inviting some of his grandchildren to join him.  He enjoyed listening to Classic Country greats and when he became ill he would often listen to Country Gospel to help relieve his worries.

A memorial visitation will be Friday, February 5, 2021, from 4pm to 6pm at Linnemann Funeral Homes, Erlanger, KY with memorial services at 6pm.

In lieu of flowers memorial contributions can be made to the American Diabetes Assoc.