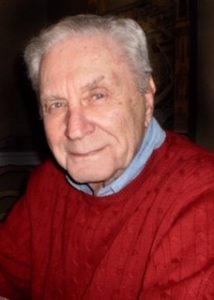 Major Thomas C. Jones, Sr., U.S. Air Force (Ret.) of Florence, Kentucky passed away at age 90 on Tuesday, April 30, 2019 at St. Elizabeth Hospital in Edgewood, Kentucky. Known as “Tom” or “T.C.” to friends and family, he was born on January 14, 1929 to parents Harold W. and Eleanor (Moren) Jones in Middletown, Ohio. He was a direct descendent of Captain Isaac Jones who in 1768 built the Golden Ball Tavern in Massachusetts, which played a significant role in the American Revolution and remains a national historic museum today. Tom graduated from Middletown High School (Class of ‘48) and attended Miami University from 1948 until 1951 when he enlisted in the Air Force. Serving from 1951 until 1972, he achieved the rank of Major and Command Pilot, flying F51 and F84 jet fighters with the 162nd Tactical Fighter Squadron and KC97 tankers with the 145th Air Refueling Squadron. Tom assumed ownership of the Harold Jones Insurance Agency after his father and founder of the agency died suddenly in 1953. In 1968, he became a co-founder and President of Insurance Associates, a successful joint venture between four Middletown insurance agents. Tom was active in many civic and social organizations throughout his life including the Retired Military Pilots (Daedalians), Middletown Rotary Club, George M. Verity Lodge, Masonic Lodge, Scottish Rite, Antioch Shrine, American Legion Post 218, Kentucky Colonels, Delta Kappa Epsilon Fraternity, and Brown’s Run Country Club. Tom was preceded in death by his parents, his sister Marilyn Douglas, and his brother Frank A. Jones. He is survived by his loving children who will dearly miss him including Thomas C. Jones, Jr., Dr. Sarabeth (Dr. Edward) Jones-Connor, Susanne (Dr. Rodney) Heiligmann and stepson Michael Haber. He is further survived by three wonderful grandchildren, Wyatt Fruland, Katie and Nathan Connor, and a special group of five nieces and three nephews as well as his furry friend “Taz.” Tom also leaves behind his caring companion, Bonnie Forkner, and many life-long friends from Middletown and beyond. At the request of the deceased, a private graveside service and interment with military honors will be held at Woodside Cemetery and Arboretum for immediate family. In lieu of flowers, memorial contributions may be made to Shriners Hospitals for Children c/o Donor Relations 2900 N. Rocky Point Drive Tampa, FL 33607 or a charity of one’s choice. Online condolences can be sent at www.linnemannfuneralhomes.com

The first time I met Tom and shook his hand I knew he had a lot of character. He immediately talked to me about a lot of things from sports to his friend, Bonnie. When talking about her, his eyes lit up, and I knew right away how much he cared for her. Tom will be missed by all who knew him, RIP Tom!

My father, Charles Oelrich, was an officer in the Army Air Corp in World War II. Like your father, Tom, he left Miami University and enlisted because of a war. I enjoyed many hours talking with him about Air Force life, B-17 bombers, and the P-51 fighters that protected them. I met Tom through my mother-in-law, Bonnie Forkner. I enjoyed many hours talking with him about his experiences flying P-51 and jet-fighters (many of those hours at The Meadows restaurant or family get togethers). He was a friendly, bright, interesting man and could tell a story! I will miss him! _D. Mark Oelrich, M.D.

To the family of: Thomas Jones.
This is a sad time for the family.
Think of the joy and the wonderful time, the joy Thomas brought to the family.
Always look forward, the book of Act 24:15, states there will be a resurrection of the dead. That will be a time to celebrate when we can welcome all our loved ones home again