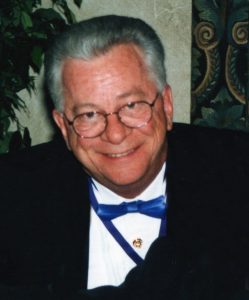 Ted “Teddy” Reed, 76, of Florence, KY, passed away on Thursday, July 16, 2020. Ted was preceded in death by his parents, Fred and Zada Reed; and his son, Fredrick “Duke” Reed. He is survived by his loving wife of 46 years, Maureen “Mo” Reed; his cousins, Nick Reed, Don Reed, and Sharon (Bill) Miller; and his step-sister, Dianna (Randy) Swain.  Ted served in the United States Marine Corps from 1961 to 1965 and he was always proud to be a Marine. He worked for the Department of Defense in Barstow, California after leaving the Marine Corps and later transferred to the U.S. Department of the Treasury, where he worked for 23 years. While in Barstow, he served on the Barstow Reserve Police Department. Ted was a member of the Barstow Masonic Lodge, Covington Scottish Rite, and the Syrian Shrine of Cincinnati, OH. He was also a past Director and past Impresario of the Royal Order of Jesters CT 7. Ted was part of the clown unit with the Syrian Shrine and was well known throughout North America as “Razzle”. He competed and won many competitions throughout the United States and Canada. His favorite past times included traveling, gambling and drinking Old Overholt.

A celebration of life service for Ted will be held at a later date.