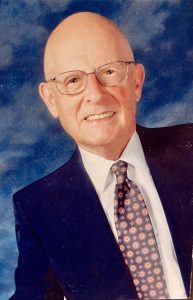 Roy Lee Jones age 94 of Burlington, Kentucky passed away with his family by his side on July 4, 2022. Roy was born to the late Eugene and Margaret Jones on July 18, 1927 in Scott County, Kentucky. Roy lived a colorful life full of great memories. He served his country during WW2 in the Navy. He sang opera throughout North America and was a member of the New York City Opera Company.  Roy worked as an executive for grocery chains for over thirty years. He was the Vice President of IGA, and SuperValue. This award winning career gave him the opportunity to work in package design. Although his job moved him around the U.S., Roy never forgot where he came from – the great state of Kentucky. He was a very proud Kentuckian. He also loved his Kentucky Wildcats, and Cincinnati sports teams. Above all else, Roy will be remembered for always being there for his family. He was a faithful father, husband, and grandfather. His consistency and loyalty to his family will be remembered for years to come.

Roy is preceded in death by his first wife, Margaret Hardy, his second wife, Cora Hardy, and his children; Polly and Denny Jones.

A private graveside service for Roy will be held on Thursday, July 7, 2022 at Bullitt County Hebron Cemetery in Shepherdsville, Kentucky at 3:00 in the afternoon.

I was Roy Jones dentist for several years. We became friends and I was able to learn about Roy his absolutely incredible life and his humble nature. For someone who had traveled the globe and affected so many people in his life he was never one to speak of himself. Roy always gave all the glory to his children and his wives. He was a gentleman and a man of God. I was able to have lunch with him on occasion and finally got him to open up about all of the adventures of his life which were many. I told Roy he should write a book about his life and if he wasn’t willing to do it, I would. I will miss him. He was a wonderful man. May he rest in peace.