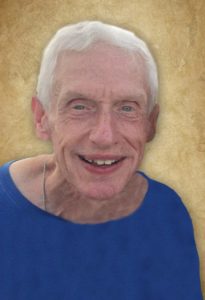 Bob Scott passed away on January 3, 2022 at St. Elizabeth in Edgewood, Kentucky after a two-year battle with cancer. He was born in Covington, Kentucky to the late Izetta (nee Young) and Granville Scott. He was preceded in death by his brother, James Scott, and brother-in-law, William Ryan.

He was a brilliant man who graduated from the University of Notre Dame with a degree in electrical engineering and continued his studies getting a Masters from MIT. He then decided to change career paths and went to the University of Cincinnati College of Medicine. He was a well-respected radiologist with Radiology Associates of Northern Kentucky for over thirty years. He remained a devoted alumni to Notre Dame and was almost always seen wearing Fighting Irish attire.

He married the love of his life, Marianne, on June 2, 1979 and they had three children together. He was a parishioner at St. Joseph, Crescent Springs where he was involved in the Men’s Prayer Group. He was a man of deep faith who spent countless hours fighting for the rights of unborn babies.

In his retirement, he spent all of his free time with his beloved grandchildren. He could often be found with any number of them at the airport viewing area. He was known for his extraordinary kindness, generosity, and great sense of humor. He will be deeply missed by many, many family and friends.

A memorial service honoring Bob’s life will be held at a later date due to COVID.

To share a story about Bob or to leave a condolence, please go to: www.linnemannfuneralhomes.com

In loving memory of a wonderful uncle

We are all struggling to process the loss of Bob Scott, a loving and devoted son, husband, father, grandfather, brother uncle, cousin, and friend. Bob was also a dedicated doctor and the impact he had on so many lives could never be understated. For me, as Bob’s nephew, there really are no words that can adequately describe how much we all loved and adored our uncle. A true genius, Bob was a master of all things technical and logical. His boundless curiosity and tremendous sense of adventure we will so deeply miss. My fondest childhood memories were of the years Bob spent with us here in Boston while studying for his Masters at MIT. I can remember the summers he spent working at GTE Sylvania in nearby Needham. Uncle Bob supplied his nieces and nephews with countless reems of computer paper, weather balloons, and other assorted gadgets. My uncle was truly a man of science. I remember talking to him, as a kid, about computers. I remember him telling me that someday computers would dominate every aspect of our society. I can remember being awestruck at his knowledge and genius. I remember all the time my uncle devoted to us, the trips into Boston and Cambridge to see The Museum of Science, The New England Aquarium, Faneuil Hall, Harvard Square, you name it. I can still remember when the Boston subway system, known to us locals as the T, was extended to nearby Quincy and my Uncle Bob was the first in our family to ride it. He couldn’t wait to take his niece and nephews into town on this new stretch of subway for an afternoon of fun and adventure. My uncle mastered every facet of this city and surrounding area and he didn’t even live here. His knowledge and sense of direction were second to none. I will miss all things about my Uncle Bob, most notably his sense of cuisine as mine is quite similar. I used to tell him we are not picky eaters but rather “cuisinely challenged.” Marianne used to say she thought it was genetic, I think she is probably right. I will miss my uncle’s great sense of humor, his love of all things Disney and Notre Dame. More than anything, how I will just miss him, just calling him to catch up on everything going on in Cincinnati and Northern Kentucky like new additions at CVG, new menu items at Frisch’s, and the best chicken tenders at Guthrie’s on Mineola Pike. I could never begin to express how much my Uncle Bob meant to me, to all of us. To my beloved Aunt Marianne, to my dear cousins Megan, Brennan, Erin, and Emi, I am so deeply sorry for your loss. Bob Scott was an inherently good man, his life was a blessing to us all. On behalf of his nieces and nephews, and his loving sister, my mom, Mary Sue, our lives lived will never be the same without him. We take comfort in our beautiful memories and knowing we have one more guardian angel in Heaven. God Bless. All our love, Jim Ryan and the Ryan Family.

Any place you saw Bob, he was always smiling, always caring and always making it better. A wonderful man who will be missed by many.