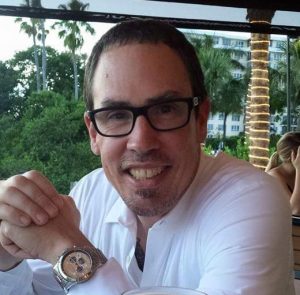 Mark Edward Kramer, 51, of Boynton Beach, FL, formerly of Villa Hills, KY, passed away on Tuesday, January 12, 2021. Mark was a System Analyst with ADT and a graduate of Cincinnati State.

He enjoyed life to its fullest.  Mark’s passion for travel began when he worked the French Open in his early twenties.   Since then, he has visited Brazil, Columbia, Japan (multiple times), and most recently multiple countries in Europe during the 2019 Christmas season to visit the various Christmas markets.  This led to Mark being fluent in multiple languages – Japanese, Spanish, and recently Russian.

Also, he was committed to physical fitness.  While in his forty’s he fell in love with cross-fit, often posting videos of his accomplishments.  This led him to compete and complete a Spartan Race.

Mark loved his family and friends.  He was extremely close to his nieces and nephews.  Always reaching out to them to share in their accomplishments.

Mark was preceded in death by his father, Thomas Charles Kramer and brother, David Joseph Kramer. He is survived by mother, Claire Kramer and his siblings, Tommy (Amy) Kramer, Debbie Kramer, Steve (Terri) Kramer, Linda (Vinny) Kramer and Jeff (Jerialyn) Kramer along with 9 nieces and nephews and 10 grand nieces and nephews. A Celebration of Life for Mark will be held on Sunday, January 31, 2021 from 12pm to 3pm at Linnemann Funeral Home, Erlanger, KY. In lieu of flowers memorial contributions can be made to St. Jude Hospital.

My thoughts go out to your family.

I remember all of you two doors up the street It has been a very long time since I have seen most of your family. I can imagine the sadness of loosing your brother/son. My thoughts are with you in this loss.
Bob Berberich