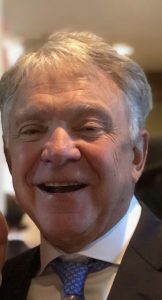 Larry Eugene Snowden, loving husband, father, mentor, coach, friend to all he knew and community leader, as well as one of the finest athletes to come out of Gallia Academy High School, passed away Saturday, July 11th. He was 66 years old.  Born April 8th, 1954, Larry grew up in Gallipolis, Ohio. Playing multiple sports, he excelled in several sports including football and basketball. He was inducted into the GAHS Hall Of Fame in 2006, having broken school records with the most TD passes and the longest punting average.  Having received many college sports recruitment letters, including one from IU Coach Bobby Knight, and one from OSU Coach Woody Hayes, Larry accepted an invitation from Ohio Wesleyan, where he received a scholarship to include playing both Football and Basketball. He graduated from Morehead State University with a bachelor’s degree in business in 1976.  After marrying his high-school sweetheart, Suzelle (ne’ Robinson), Larry began his State Farm Agency in Fairfield, Ohio in 1976. Later moving his office and settling with his family in Northern Kentucky in 1986.  A successful business man and traveler of the world, Larry helped to establish Fit Bodies, Inc. with his wife in the late 90s. Together they helped pioneer their vision with offering professional wellness and helping people experience the joys and renewed perspective of traveling abroad.  Larry was an avid golfer, skier, marathon runner, skydiver, and excelled at most every activity, in which he participated.  Larry was preceded in death by his mother Verna (ne’ Osborne) and is survived by his father Caroll K. Snowden, his beloved wife Suzelle, his Son Chad, his son Jimmy and his wife Jane, his granddaughter Nola, his Spanish son Guillermo, his siblings Steve, Gary and Annette, his dogs Bonham and Bixler, and the many “lost boys” who found a second home with his family.  No services nor interment will be held as a Celebration of Life event will be scheduled at a later date.  The family asks, kindly in lieu of flowers that donations be made instead to the Larry Snowden Fund benefiting The Christ Hospital Heart Failure Program.  The Christ Hospital Heart & Vascular Program at 2123 Auburn Ave, Ste 528, Cinti Oh 45219.  Online condolences can be made at www.Linnemannfuneralhomes.com

Thankful I meet you

From the jump start when I met you, you always helped me when I would call with issues, always called me back. As time went on, I considered a friend. To me you were good man, and I was thankful to know you. I will miss going to the office and seeing a new expensive car in the lot knowing it was yours and asking you about them. I appreciate the good memories for conversations we would have. May the lord bless you and your family.

Thank you, I will miss you

Larry you were one of a kind, you smile and stories always made me laugh. You were/are such an important part of my life. I am blessed to have walked into your office and become part of your State Farm Family all those years ago and all our inside office jokes we had. I will forever treasure the time I had with you. Love you always.
Michaela Branch