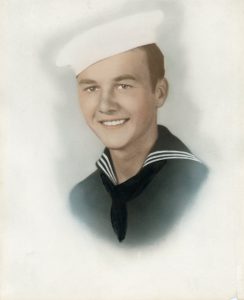 Joseph Charles Brandner, Erlanger Ky, died peacefully in his sleep in his daughter’s loving care surrounded by his family on August 7, 2020.  Joseph ‘Jay’ Brandner was born on May 13, 1926, in Latonia, KY, assisted by a midwife in his family home.  He graduated from Dixie Heights High School and enlisted in the US Navy in 1944.  He served with distinction on the escort carrier USS Suwannee in the battle of Leyte Gulf during WW2.  His ship was struck by two kamikaze planes, and the crew, with the exception of the engine room where Jay served, had to abandon ship. He lost his best friend when the first kamikaze struck the ship, and he lamented this incident for the rest of his life. The Suwannee was repaired and eventually sailed to the port of Nagasaki after the second atomic bomb was deployed.  Jay was among the first sailors to walk into the city after the bomb dropped, and he fondly recalled bringing hard candy to give to the children who followed the sailors around the city.  The grandmother of his grandson’s wife survived the destruction of the bomb in Nagasaki.  Jay was preceded in death by his parents Else (Nitzke) and Joseph, his loving wife Barbara (Stephenson), sisters Blanche (Davis), and Naomi (Brown) and several nieces.  He is survived by his daughter Susan Gray (Eric), his son Steven (Marianne), grandsons Stephen Gray (Vatsady), Peter Joseph Gray (Satomi), Emmanuel Gray, Jonathan Gray, and Benjamin Crafts-Brandner.  He is also survived by his great-grandson and namesake Nile Jai Sivongxay Gray, a source of great joy during his final years. Jay and Barbara raised their family at St. Henry’s church and school, with Barbara spending time as a substitute teacher and member of the choir. Their connection to the St. Henry’s community will live on with the establishment of the Barbara Jean and Joseph Charles Brandner Memorial Fund dedicated to the education and enrichment of future generations. Donations can be sent to St Henry Church c/o educational/tuition fund 3813 Dixie Hwy, Elsmere KY 41018.  The family thanks the St. Elizabeth hospice team for the loving care and support during this significant time.

Remembering your dad and mom

Sorry to hear of your dad’s passing. I will always remember your parents as being pleasant and loving neighbors. I will say a prayer for their easy transition into the loving arms of our Lord Jesus Christ. Take care.

My Husband and I always saw your Mom and Dad at church 930 mass our deepest sympathy.

My Husband and I always saw your Mom and Dad at church 930 mass our deepest sympathy.