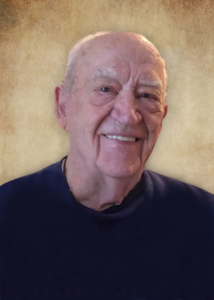 John E. Daugherty, age 88, of Ft. Mitchell passed away on Friday, July 29, 2022 while at St. Elizabeth Hospice in Edgewood. John was born to the late Minor and Cora Belle Daugherty on November 8, 1933 in Covington, Kentucky.

After losing his father at the age of 8, John started working. He started out selling newspapers the day of the attack on Pearl Harbor. He worked hard enough to eventually put himself through school by working at Buettel’s Bakery. John was very proud of his time spent in the United States Army serving as a Paratrooper in the 82nd Airborne during the Korean War. Following his time in the service, he obtained a Masters Degree from Xavier University through their night school program. He later became a CPA and was more than happy to do taxes for everyone he knew. He was an entrepreneur and owner of OKI Distributing. He was a history buff who enjoyed traveling with his wife, Anne. He also enjoyed bowling and playing cards with friends every Thursday. John also was a Cincinnati Reds fan. Above all else, John loved his wife and family.

John is preceded in death by his sister, June Smith, and his mother in law, Esther Mussman.

He is survived by his loving wife of 67 years, Anne Daugherty, his daughters; Sharon (Tom) Hoppenjans, Holly (Bobby) Ferguson, Dawn (John) Miller, his sisters; ​​Marie Morrison, Patricia Pate, his beloved grandchildren, and great-grandchildren. He will be dearly missed by those who knew and loved him.

A visitation for John will be held on Wednesday, August 3, 2022 at Linnemann Funeral Homes in Erlanger, Kentucky from 3:00-5:00PM.

Donations can be made in John’s name to the Life Learning Center in Covington, Kentucky.