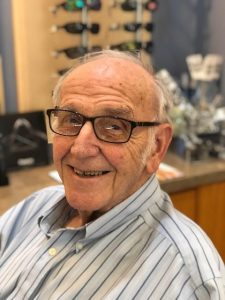 John Andrew Gesell, 88, of Florence, KY (formerly of Gibson City, IL), passed away on Tuesday, July, 27, 2021, at Florence Park Nursing and Rehab Facility. John (or Jack) was born July 26, 1933 in Belvidere, IL, to William Marian Gesell and Hildar Mellstrom Gesell. He married Carol Walker on Aug. 25, 1957 in Mazon, IL. She preceded him in death as well as his parents and two brothers, Faye and Donald. John is survived by one daughter Carla Gesell-Streeter (Tom Streeter) of Burlington, KY, one son Neal Gesell (Julie) of Geneva, IL, one grandson Kyle Gesell (Kimberly Carter) of Lawrence, KS, and one great-granddaughter Abigail Gesell. John attended the University of Illinois and was a member of Illi-Dell (later Alpha Gamma Sigma). After graduation, he managed the Animal Science Swine Farm at the University of Illinois before moving into agricultural sales: first for Farmers Hybrid, then Asgrow. He was a licensed realtor and served on the City Council of Gibson City, IL for several years. He was an active member of the Gibson City Lions Club and served as their president. After retirement, he served on statewide committees focused on sustainable agriculture and youth in agriculture. He was a member of First Presbyterian Church of Gibson City and served on the Blackhawk Presbytery board for many years. He was first on a lot of people’s list as a person to call when it was time to get something done. People liked him being around. And he wanted to be there. John was a born storyteller who personified the adage that a stranger is only a friend you haven’t met yet. He had a preternatural gift for finding Westerns on television, especially those starring John Wayne. He never told a story that wasn’t true, even the ones that never actually happened. There will be a private graveside service for family at a later date. Friends and family are asked to toast John’s life, preferably with a Maker’s Mark Manhattan or a scoop of butter pecan ice cream. A mug of root beer will also fit the bill. In lieu of flowers, memorials may be made to the Boone County (KY) Animal Shelter, where John was a volunteer (https://secure.boonecountyky.org/bcas/bcasapps/Donation).