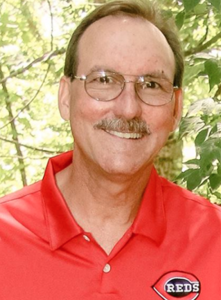 A lifelong lover of fireworks and personally quite the firecracker, Jerry Dietz fittingly passed away on July 4th at his home in Erlanger.  He was surrounded by his loving family and puppy dog after giving cancer hell for the past couple months.  Jerry was both a jack of all trades and a master of most of them, something that anyone whose air conditioner, heater, garage door, toilet, or deck he fixed over his 61 short years on this earth could tell you.

He worked for nearly 25 years at “Doc” Rusk in Covington alongside his father Fred Jr. and brother Fred III, becoming both the best HVAC guy who’s ever lived and a master electrician.  To support his family and help his industry, he also taught night classes at JD Patton Vocational School and managed to do all that and still be there for his wife and kids.

Jerry took his talents to Corken Steel in 1999 and was a branch manager there before life decided he was too tough not to take on another challenge.  After suffering two strokes in 2005, he retired because he only had “one and a half hands” and “couldn’t talk,”…though no one told him he was done working or talking, apparently.  He put his handyman chops to good use making his own physical therapy tools as he waded through the frustration of learning how to communicate with severe aphasia.  He lost some of the ability to add his signature sharp wit to any conversation, but by talking around the words he couldn’t find, he somehow became even funnier.

He founded and was CEO of “Hit and Run Heating and Cooling,” a renowned multi-county institution.  The company boasted several unpaid employees like his brothers-in-law Greg Richardson and Bobby Hahnel who shared his skills and love for helping others.  H&R mostly accepted payment in beer and quality time but kept hundreds of people cool, warm, plumbed, electrified, and entertained over the years.

Jerry loved to tell jokes, even though most of them were terrible puns that made you laugh till you cried and embarrassed that you had ears.  He always issued a smug chuckle at his own wisecracks, quietly grinning from ear to ear in pride at the comedic horror he had wrought as he watched you cringe and sigh.

He taught so many people so many things, including perseverance, hard work, how to stand on a ladder, what happens when you stick metal objects in electrical fixtures, that it’s okay for men to cry, and how to do everything in life the way you want to do it, regardless of what anyone else thinks.

Jerry’s hopefully cracking open a heavenly Miller High Life with his mother Betty, father Fred, sister Dianne, brother Fred, mother-in-law Ruth, and sister-in-law Sharon.  His wife of over 40 years, Diane, daughters Michelle (Joe) and Chelsea (Alex), son Jake, sister Sandra, brother John, best friend “Wild” Bill Brown, beloved K-9 unit Loki, 4 granddogs, numerous nieces, nephews, and family members-in-law are left to repeat some of the best Jerry jokes to each other as they mourn the loss of him.  He constantly reminded everyone that, “Im Himmel gibt’s kein Bier, drum trinken wir es hier.”  His loved ones all hope that the old German adage is wrong so that he’s not disappointed by the lack of hoppy beverages up there.

A memorial mass for Jerry will be held at 11 am on Wednesday, July 13th at St. Henry Church in Elsmere.

If Jerry had a dollar, he’d stay up all night looking at it.  If you happen to have any extra that you want to donate in his honor, please give them to St. Henry Church where he went to school and volunteered for most of his life.