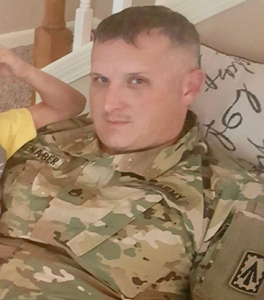 Jasen Richard Nienaber, 41 years old, of Florence, KY unexpectedly passed away from a suspected heart attack on September 5th, 2020. He was born August 19, 1979 in Kentucky. Jasen is a Staff Sergeant in the Army with 20 years of total service to the US Military between the Marines and the Army. He completed many tours of duty, including missions in Afghanistan and South Korea to name a few. As a diesel mechanic, he is known for his craft of being very good with his hands, and he has an uncanny ability to tolerate physical pain with strength. He absolutely loves camping, shooting guns, fishing, and hiking. He is a large man that gives amazing tight, heartfelt hugs especially to his wife, Jessie, and his children. He is also a man of very few words, but when he speaks, he does so with purpose and makes his point clearly. Finally, he has a striking resemblance to his father, Rick. Heaven needed another Angel, and we pray Jasen and Rick are united in peace. He is survived by his wife, Jessica (Jessie) Nienaber; his children, Alaina, Rylan, and Jacob; his mother, Gerri Nienaber; his sister, Amanda Nienaber; and his brother, James (Sarah) Nienaber; and his eight nieces and nephews. He is predeceased in death by his father, Richard (Rick) Nienaber. A visitation will be held at Linnemann Funeral Home (1940 Burlington Pike, Burlington, KY 41005) on Thursday, September 17th. Visitation with the family is 5:30 pm – 8:00 pm. With Military Honors to start at 7:30pm. Due to COVID-19 regulations, guests will be expected to wear a face mask and maintain social distancing standards.