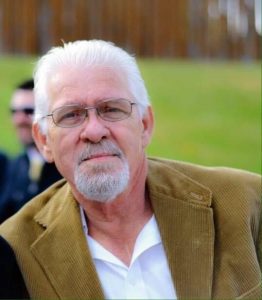 James “Jim” Herman Boggs, 74, of Hebron, KY passed away peacefully on Sunday, May 29, 2022 at St. Elizabeth Hospital in Edgewood, KY. Jim was born October 8, 1947 in Clintwood, VA to the late Herman Eugene and Georgia Frances Boggs. He proudly served his country as a member of the U.S. Air Force during the Vietnam War. Following his military service, Jim continued to serve as he embarked on his career as a police officer. Jim worked for the Broward County Sherriff’s department and retired as a detective after 20 plus years of service. He was also member of the F.O.P and the American Legion, and he really took pride in protecting his country and its citizens. Jim also was an avid sports fan; he particularly liked baseball and the Cincinnati Reds. He was also a big football fan, and loved to gather with friends and family to watch a big game. Jim was also a “jack of all trades”, and he was especially into woodworking and carpentry. It seemed he could do anything he put his mind too. Jim was also an auctioneer; he enjoyed working at the auction house and meeting the people who would come in. Jim had a big personality, and an even bigger heart. He was a proud “Poppy”, and he cherished the time he had spent with his grandchildren. He especially enjoyed taking them for tractor rides around the property. Jim always made his family a top priority, and he worked hard to give them a good life. His parents, and his brother, Kerry Boggs preceded Jim in death. Jim is survived by his loving wife of 53 years, Nancy Boggs, his beloved children: Angela (Justin) Fike, and Chad (Jessica) Boggs, his cherished grandchildren: Dustin (Allysa) Fike, Lyndsay Fike, Delaney Fike, Dylan (Alison) Fike, Tyler Boggs, Raven Boggs, Kennedy Boggs, Brock Boggs, and Keeton Boggs, his dear siblings: Doug (Karen) Boggs and Vicki (Scott) Boos, and his great-grandchild, Aven Fike. A memorial service will be held for Jim on Friday, July 29, 2022 at 11:00 AM at Linnemann Funeral Home and Event Center, 1940 Burlington Pike, Burlington, KY 41005. Immediately following the service Jim will be laid to rest at Kentucky Veterans Cemetery North in Williamstown, KY. A reception will also be held following the burial from 3:00 PM until 5:00 PM at Linnemann Event Center. In lieu of flowers, memorial contributions can be made to the Vietnam Veterans Memorial Fund at 1235 South Clark Street, Suite 910, Arlington, VA 22202 or to the Wounded Warrior foundation at P.O. Box 758516, Topeka, KS 66675-8516.

Jim my fellow detective with a great sense of humor and even a bigger smile you sir will be a pleasant memory. Until we meet again brother RIP

From your brothers and sisters at BSO

Our condolences to all the Boggs family. Jim was greatly loved and admired by his co-workers at BSO and will be missed. May he rest in eternal peace.