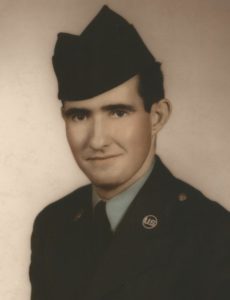 James Howard Keeling, 88, of Union, KY passed away Tuesday, July 23, 2019 at his residence in Union. James was born July 18, 1931 in Willisburg, KY to the late Elisha and Anna Pearl Keeling. He proudly served his country as a member of the U.S Air Force. He was a member of the Church of God of Prophecy in Deer Park. He was also preceded in death by his wife: Imogene Keeling, his siblings: Juanita Adams, Doris Swegles, Leon Keeling, John Keeling, Stanley Keeling, Melvin Keeling, and Irene Martin, and his grandchildren: Eric Faulkner, and twins, Andrew and Ryan Faulkner. James is survived by his loving daughters: Debbie (Richard) Faulkner, and Diana (James) Javins, his grandsons: Joseph (Aretta) Javins, and Aaryn Faulkner, his great-granddaughter:  Kaelyn Asher Javins, and his brother: Joseph Keeling. A visitation will be held for James on Friday, July 26, 2019 from 5:00 PM until 8:00 PM at Linnemann Funeral Home, 1940 Burlington Pike, Burlington, KY 41005. A service will be held for James on Saturday, July 27, 2019 at 10:00 AM at the Funeral Home. A graveside service will be held at Highland Cemetery in Fort Mitchell, KY following the Funeral Home service on Saturday morning. The family requests that memorial contributions be made to St. Jude’s Children’s Research Hospital at 501 St Jude Place Memphis, TN 38105 or to Josh Cares at 9378 Mason Montgomery Road, #427
Mason, OH 45040.