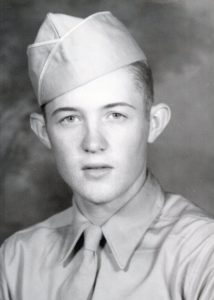 Howard E. “Gene” James, 90, of Union, KY passed away Friday, December 13, 2019 with his loved ones by his side. He was born November 19, 1929 in Statesville, Tennessee. Howard proudly served his country as a member of the US Army, 35th Infantry Regiment, 25th Division, Tropic Lightning, during WWII. Howard was a loving husband, father, grandfather, great-grandfather, and a loyal friend to many. He will be greatly missed by all that knew him. His survivors include his loving wife of 71 years, Virginia James, his beloved daughter: Debbie Osterbrock, his dear granddaughter: Lisa (Joey) Peters, his great-grandchildren: Logan, Noah, and Emmy Peters, his half siblings: Ann (Ronnie) Sloan, Bobby James, and Ed (Susie) James, his sister-in-law: Norma (Harold) Evans, and many loving nieces and nephews. He was preceded in death by his father: Malcolm James, his mother: Eunice Saunders, his daughter: Sherrie Y. Schneider, and his brother: Ray Dean James. Howard worked for Procter & Gamble at the Ivorydale Plant, and retired at the age of 55, after almost 20 years of service. Following retirement, Howard and Virginia moved to Tampa, FL where they lived for over 30 years. Howard was a member of the American Legion, the Masonic Lodge in Norwood #576, he was a Shriner, a member of the Scottish Rite and a member of the Elks Lodge #708 in Tampa, FL. A memorial visitation will be held for Howard on Saturday, December 21, 2019 from 2pm until 3pm at Linnemann Funeral Home, 1940 Burlington Pike, Burlington, KY 41005. A memorial service will be held following the visitation at 3pm at the Funeral Home. Memorial contributions can be made to St. Elizabeth Hospice Fund at 1 Medical Village Drive, Edgewood, KY 41017 in Howard’s honor.

This past year i have grown close to Howard. To say that i knew this man is a privilege. He loved getting his feet soaked and rubbed with coco butter cream. His part of the job was to help my butt up off the floor. And never did he forget. Sometimes he was ready to help me up a lil to soon. And we also had a little fist bump we would do. Man im gonna miss you mu guy.
Love ya
Mary