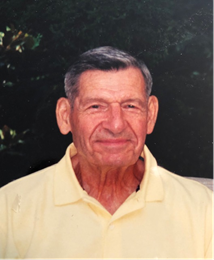 Harold L. Hayes, 96, of Ft. Wright, KY, and former long-term resident of both Louisville, KY and Whitesboro, NY passed away on Thursday, April 2, 2020 at St. Elizabeth Hospital from complications of the Coronavirus. He was a devoted husband to Elizabeth (Betty) and loving father, grandfather and great-grandfather.

Harold was born and raised in Boston, Massachusetts. He attended both Springfield College in Springfield, MA and Trinity College in Hartford CT.  Education was paramount and he was pleased that all of his children and grandchildren completed college.

World War II put college on hold and he entered the US Navy. Harold was an original member of the Navy’s elite Underwater Demolition Team, predecessor unit to the Navy Seals. As the war ended, LT JG Hayes continued his service and assigned as a Rehabilitation Officer at Chelsea Naval Hospital, Boston, MA.

Harold spent his career with General Electric in purchasing management. He enjoyed the challenges his work offered, travelled to various parts of the world and was appreciative of the opportunity to provide for his family many of the things he did without, growing up in the great depression.

Athletics and exercise were a constant. He played college basketball at both Springfield College (birthplace of basketball) and Trinity College where he was captain of the team. He enjoyed tennis, golf, snow skiing and racquetball to name a few. He started jogging (in the early 1960’s) and played backyard football and basketball with his sons and their friends uncommon at the time for a man 40 years of age. He never stopped exercising utilizing the recumbent exercise trainer bicycle three time a week thru recent months.

Harold believed in “giving back” to his community and volunteered in various roles including many years as Mayor and City Commissioner to the Incorporated City where he lived. He also spent 30 years of volunteer service for Recording for Blind.  He was founding member of the Whitesboro High School Booster Club (NY) that enabled high school sports to continue during austerity budgets. He coached in the Whitestown Little League during the late 50’s and 60’s. He was passionate about supporting the Louisville Public Library, U.S. National Parks, Norton Children’s Hospital in Louisville KY and the American Heart Association.

Harold was preceded in death by his daughter, Linda Robinson (1999). He is survived by his loving wife of 70 years, Elizabeth “Betty” Hayes nee MacCutcheon; his sons, Paul (Mary) Hayes of Maplewood, NJ, Jim (Patty) Hayes of Deansboro, NY; Ken (Leslie) Hayes of Edgewood, KY; his son-in-law, Hank Robinson of Louisville, KY; sister-in-law, Shirley Hayes of Boston, Massachusetts.  Harold also leaves behind his 11 grandchildren and 9 great-grandchildren. Services for Harold will be held at a future date.

Memorial contributions may be made to:

So Sorry To Hear

Our prayers are with The Hayes Family. I still remember those football games “under the lights” in the back yard – so much fun growing up. God Bless, Bob McIlwain

My prayers for the Hayes family

To Betty and the entire Hayes clan. I am so sorry to hear about Harold’s passing. I have very fond memories when Betty and he would come to visit Boston. He was always so warm and welcoming. Alan had a lot of respect for Harold and loved to go skiing with him. This month makes the 3rd year since Alan passed therefore it is especially touching you requested donations go to the ALS Association. Thank you.
Diane Hayes