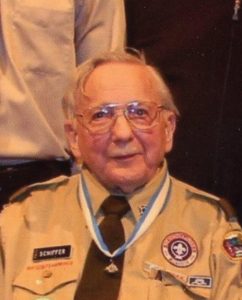 George Philip Schiffer Jr. MBA PE Age 89, born October 17, 1930.  He was preceded in death by his parents, Mr. George P. Schiffer Sr and Nancy Durant (Smith) Schiffer, younger brother, John Richard (Diane) Schiffer and survived by a brother Thomas Durant Schiffer (Carol), nephews Thomas R. Schiffer (Karen) and Andrew Boyd Schiffer (Jennifer); niece Christen Baldwin (Thomas) and grand-niece, McKenzie Grace Baldwin.  Phil, as he was known to family and most friends, was known as George to army and work associates.  He attended Crescent Springs and Park Hills Elementary Schools.  He graduated from Dixie Heights High School in 1948.  He subsequently obtained under-graduate degrees from UC Night School in both Industrial Management and Factory Management, Xavier University and Thomas More College, and a Masters Degree from Xavier.   He served stateside in the US Army during the Korean War as a Micro Wave Radio Specialist.  He was baptized in the First Presbyterian Church in Covington, then located where the IRS Center is now.  He was a Charter Member, Sunday School Superintendent, deacon, historian and elder in the Lakeside Presbyterian Church in Lakeside Park.  He was a licensed professional engineer in both environmental and civil engineering.  As a Boy Scout Leader and officer in the BSA, he presided over the induction of over fifty Eagle Scouts in Troop 820.  During over a half-century tenure, Phil presided over a group of Eagle Scouts for many years, founding and nurturing a group called the Eagles Nest.  Phil never married, the Scouts and their famlies, became part of his voluminous extended family.  They have been meeting for many years on Phil’s farm in Gallatin County, with an annual gathering around Thanksgiving.  His long life was marked by his being a faithful church member, family member, long-time Kentucky Colonel, 32nd Degree Mason since 1963 in Golden Rule Lodge-109 F&AM, a scout leader and friend to many.  After his parents were deceased, he lived alone in a house he bought in 1957 in Park Hills until mid-April of this year.  Interment will be in the family plot of Forest Lawn Memorial Park attended by family only.  A memorial service and celebration of life for Phil’s family, scouts and friends, will be held at a place and date to be announced.

On behalf of the Honorable Order of Kentucky Colonels, the Order offers its deepest condolences and is proud of a life well lived by Colonel Schiffer. Thank you to your service to the Scouts, your country and family.

George was a pleasure to be around. He made coming into work every day even more exciting. He always had something to say, though it was mostly about coffee or his beloved puppy.