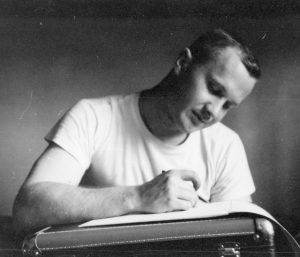 George Corridan spent his early life in Terre Haute, IN where he attended St. Patrick’s elementary school. Because his father, Thomas, worked for New York Central Railroad, George spent his youth living in many different cities, ranging from Dayton, OH to Memphis, TN, before settling in Cincinnati, OH.

George attended St. Xavier High School. He was a member of the school football team and he served as either class President or Vice President all four of his high school years. He spent these youthful years with his friends chasing barges on the Ohio River or occasionally skipping school to spend the afternoon squirrel hunting.

Following high school, George enlisted in the US Army and served during the Korean War. After finishing his military service, George worked fulltime for Walter Manion and attended University of Cincinnati’s Engineering School in the evenings for 11 years before graduating with a degree in Civil and Structural Engineering. In 1958 he married Judith Corridan, with whom he enjoyed 47 years before her passing. Together, they had three children (Dennis, Susan, and Karen), eight grandchildren (Ryan, Naseem, Isabella, Samira, Cassandra, Neeaz, Teresa, and Camron) and one great-grandchild (Layla).

George enjoyed outdoor activities such as camping and fly-fishing, traveling, and attending his grandchildren’s graduations and sporting events over the years. In his later years, he enjoyed tailgating at his children’s and (now grown) grandchildren’s alma maters and travelling with the family, including a voyage back to visit the family homestead in Southern Ireland.

George never met a stranger. He was a people person through and through and would always share a warm smile and extend a hand in greeting to those around him. This trait continued even into his final years as a resident at Pinebrook Retirement community, where he was cared for and loved by the site nurses and staff.

George was preceded in death by his parents, Thomas and Mabel Corridan; his wife, Judith Corridan; and his siblings, Mary Theresa Mooney, Helen Allison, Jack Corridan, and Carolyn Rose Corridan.

George is survived by his three children, eight grandchildren and one great-grandchild, all of whom cherished him and will dearly miss him.

To share a story about George or to leave online condolences, please go to:  www.linnemannfuneralhomes.com.