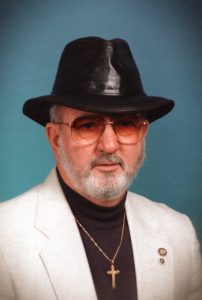 Don C. Mattingly, 83, of Burlington, KY passed away Thursday, July 25, 2019 in the comfort of his home. He was born on April 6, 1936 in Louisville, KY to the late John and Martha Mattingly. Don left high school early to join the Marines, and served in Vietnam and Korea, where he received a Purple Heart. He served for 23 plus years in the Marines before retiring as a Master Sergeant. Don was a Kentucky Colonel, a member of the Shriner’s, and a Freemason. He was also preceded in death by his stepfather: Bill Clemons, brother: John Mattingly, and his daughter: Martha “Jean” Mattingly. Don was a loving husband, father, and grandfather, and his survivors include: wife: Lucinda Mattingly, daughters: Donna (Tony) Hoskinds, Ibeita (Eddy) Byrley, and Katherine (Randy) Perkins, grandchildren: Sean, Nikole, Adam, Eddy Jr., Brian, Brandey, and Cheyanne, 2 step grandchildren, 13 great-grandchildren, and 1 great-great-grandson. A visitation will be held for Don on Tuesday, July 30, 2019 from 9am until 10am at St. Paul Church, 7301 Dixie Hwy, Florence, KY 41042. Mass of Christian Burial will be held following the visitation at 10am at the Church. Following Mass, entombment will be held at Floral Hills Memorial Gardens in Taylor Mill, KY. Memorial contributions can be made to the American Cancer Society at P.O. Box 22478, Oklahoma City, OK 73123.

My family wishes to express their sincere condolences to the family and sympathy to the friends of Don Mattingly. His service as a Warrior and the many personal sacrifices he made are truly worthy or the title “American Hero”. We all thank him for defending the United States of America, her freedoms and interests. His outstanding devotion to God, Country, Family and the United States Marine Corps will not be forgotten by those who have gone before him, those who are currently serving and those who will step up in the future. Don, your mission is now complete. Stand down and Rest in Peace! “All Gave Some – Some Gave All”