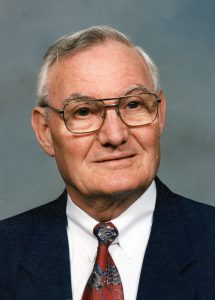 It is with deep sadness that the family of David Hugh Jones announce his passing from this life on Friday, July 24, 2020. It is also with great joy that we celebrate his promotion to Glory and his presence with the Lord Jesus Christ. Although we grieve his absence today, we only rejoice in his upgrade of abode – an eternal address he has furnished with spiritual investments of the “silver and gold kind” for 93 years. David was met at heaven’s gate by Deloris, his beloved wife of 73 years, his father, mother, 5 siblings, first grandson Lee, and other family members, as well as countless friends, many who are there because of “Brother David’s” witness and influence in their lives.

David will be lovingly remembered by his three children- Teresa Kraft and husband Gary of Union, KY, Melanie Fazekas and husband Steven of Florence, KY, and Johnathan Jones and wife Debby of Union, KY. Through God’s providential kindness and mercy, we children grew up in a stable, loving home led by a father who faithfully persisted in the application of his wedding vows and commitment to guiding his family according to Biblical principles. He will be honored in our hearts as a man who stood tall among men, remained constant to his family and his beliefs, and finished the race well.

Grandchildren, Holly, Jonathan, Matthew, Stephanie, Melissa, Rebekah, Candace, Carrie, Nathan, and 24 great-grandchildren will miss the steady wisdom, generous spirit, and warm playfulness of their Papa Jones. Some knew Papa well, some hardly at all, but his legacy will thrive as we continue to tell the stories of God’s faithfulness through him to his family and the many others whose lives he impacted.

David was born on December 10, 1926 to the late Rose and Charlie Jones in Barbourville, KY. He graduated from Barbourville High School where he played the baritone, starred in basketball, and jitterbugged with Deloris Adams until he entered the U.S. Navy at age 18. He was a proud soldier in World War II, stationed at Okinawa and had many stories to tell- from the deeply sad, to the wildly hilarious. Upon release from the military, David married Deloris on June 15, 1946, and they settled back in KY until relocating to Jacksonville, FL in 1953. There, he helped run a family general store, managed a men’s clothing store, and eventually discovered his true calling as church pastor. He ministered as associate pastor at Buford Grove Baptist Church in Hilliard, FL. During those years he taught, preached, sang, counseled, nurtured, and mentored a congregation of people who loved him well and admire him still. Men young and old recognized his spiritual maturity and came to him for guidance; women young and old appreciated his kind, gentle charm and came to him with pies and casseroles. People from church still call to check up on him, revisit old memories, and wish him well.

David and Deloris moved to Union, KY in 2005 to be near their children after Deloris’ Alzheimer’s diagnosis was pronounced. They attended Florence Baptist Temple and lived quiet lives as their circumstances were altered by the many challenges of aging and disease. David served his wife steadily throughout her illness, attending to her needs at home and providing excellent care-givers who treated them both like family. We are all profoundly grateful for the dedication of these precious ladies: Emily, Debbie R., Aubrey, Steffanie, Amy, and Debbie A.

In consideration of present environmental challenges, the family has decided to limit the memorial service attendance to immediate family members. A brief interment service will be held at KY Veterans Cemetery North at 1:00 PM on July 29, 2020. All are welcome.