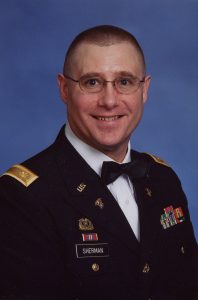 John Christopher “Chris” Sherman, 56, of Burlington, KY passed away unexpectedly on Tuesday, October 26, 2021 at St. Elizabeth Hospital in Florence, KY. He was born April 2, 1965 in Covington, KY. Chris proudly served his country as a Major in the U.S. Army before retiring after 25 plus years of service. He was a proud American and he served his country honorably. Chris was a graduate of Dixie Heights High School class of 1983, and he enjoyed playing football and baseball. Chris loved sports, especially baseball; he was a big Cincinnati Reds and Boston Red Sox fan. He enjoyed exercising, running and taking kick boxing classes. Chris also loved Halloween, and dressing up with his kids. Chris was a loving father, and his children were his pride and joy.

A visitation will be held for Chris on Monday, November 1, 2021 from 5pm until 8pm at Linnemann Funeral Home, 30 Commonwealth Avenue, Erlanger, KY 41018. Mass of Christian Burial will be held for Chris on Tuesday, November 2, 2021 at 10am at Mary, Queen of Heaven Parish, 1150 Donaldson Hwy, Erlanger, KY 41018. Chris will be laid to rest at Kentucky Veterans Cemetery North in Williamstown, KY immediately following Mass. Memorial contributions can be made in honor of Chris to the Wounded Warrior Project at P.O. Box 758516, Topeka, KS 66675-8516 or to Hoxworth Blood Center at 3130 Highland Avenue 4th Floor, Cincinnati, OH 45219.

Haven’t talked to Chris in decades, but knew him at Dixie HS, NKU, and in the Army. A very decent, good natured man who always had a great attitude, gone too soon.

Chris. Thanks for being a friend to me and your counsel on PTSD. A fellow soldier who befriended me even though I was in the Irish Army. You will be missed my friend. Condolences to your family. Slante.

Went to Dixie with Chris he was such a soft spoken stand up guy. So sorry to hear this, you’ll be missed.

Such a special person

I worked with Chris at social security when he was just hired. He was a happy, fun and respectful co worker. He always told me stories about what he did or was going to do with his children. He had enormous pride in both of them. I know they will miss him. It was my honor to have know him.
Ellen Prince

Your Loss is felt by Many

Chris was a great man and a wonderful role model. I’m sadden by this news and wish you all peace and comfort during this difficult time.