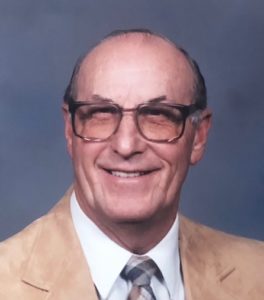 Chester Leo Henderson, 90, of Union, KY passed away Wednesday, October 16, 2019 in Sarasota, FL. Chester was born on June 17, 1929 in Keefer, KY to the late O.P. Henderson and Verda Wiggins. He attended Lloyd High School before going on to Western Kentucky University, Bowling Green. Throughout his career Chester worked for the Kentucky State Police, and he was the first Chief of Police in Florence, KY. He was also a Boone County Deputy Sheriff, and the Boone County PVA from 1977-1996. He was also the president of the Kentucky PVA Association, and was on the Board of International Assessor’s Association (IAAO). Chester loved and enjoyed being with his family, golfing, traveling, and watching all sports. He was preceded in death by his loving wife of 48 years: Lynn Olive (Jarrell) Henderson, 3 sisters, and 5 brothers. Chester is survived by his sons: Chet Henderson of South Carolina, Mike (Kym) McCormick of Tennessee, and Tony Henderson of Georgia, his daughters: Trena (Henderson) Beckham of South Carolina, and Cheryl (Henderson) Sullivan of Kentucky, 13 grandchildren: 7 girls, and 6 boys, 6 great grandchildren: 4 girls, and 2 boys, his very close hometown friends and family: Patty Gutzeit, and Larry and Bev Burchman, and numerous cousins. A memorial visitation will be held for Chester on Thursday, October 24, 2019 from 11am until 12pm at Burlington Baptist Church, 3031 Washington St, Burlington, KY 41005. A memorial service will be held following the visitation at 12pm at the Church. Memorial contributions can be made to TROOPER ISLAND, INC. KENTUCKY STATE POLICE at P. O. Box 473, Albany, KY 42602 or online at http://kentuckystatepolice.org/trooper-island/. Online condolences can be made at www.linnemannfuneralhomes.com.

Just want you folks to know that I hold you in my thoughts and prayers during this time of loss. I didn’t get to know Chester, but my late wife Maureen Jarrell often spoke of him fondly. Had I been fortunate enough to have gotten to know him I know we would have been fast friends. Meredith Barkley

So sorry for your loss Tony!

My prayers are with you and your family as you go through this difficult time. May God give you comfort and peace.

So sorry to learn of Chester’s passing. He served the County for many years. Our thoughts and prayers are with him and his family.
Pat and Patty Raverty

Our condolences to family and friends. Chester and Lynn served our community for many years.