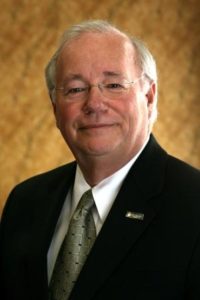 His high school sweetheart and devoted wife of 55 years, Beverly (Wood) Caddell, served her husband tirelessly over the 4 years from his initial dementia diagnosis to his passing, and in the process, defined for us just what sacrificial love looks like.

Arnold, Jr was born to Arnold E. Caddell, Sr and Helen Caddell on June 7, 1944 and grew up in Covington, Ky graduating from Holmes High School in 1962.

He didn’t immediately attend college after high school because he had a full-time job and an unstoppable work ethic, but later earned a bachelors degree from Northern Kentucky University in 1977, while serving as the Administrator of the Baptist Convalescent Center in Newport, Ky where he worked until 1979.

Arnold was a serial entrepreneur.  During his time with the Baptist Convalescent Center, he and his family became regular customers of a Bonanza Steakhouse in Covington, Ky.  Arnold liked the concept so much that he became a franchisee in 1979, opening his first steakhouse on Mall Road in Florence, Ky.  Over an 11 year period, Mr. Caddell owned development rights to 35 counties in Southern Ohio and Northern Kentucky.  During his years in the restaurant business, Arnold was asked to serve as a director at Peoples Deposit Bank in Burlington, Ky in the late eighties, gaining an appreciation for community banking.

In 1990, Mr. Caddell founded Heritage Bank in Burlington, Ky in an era when many local financial institutions had been purchased by larger regional & national banks leaving Northern Kentucky void of locally owned & operated community banks.  Over nearly a 30-year period, with humble beginnings in a trailer with 6 employees at inception, Heritage Bank has grown to $950 million in assets with 19 retail locations in Northern Kentucky and Greater Cincinnati.  Arnold oversaw the unprecedented growth of the bank until his retirement in December 2016.

Arnold was also extremely active in the community and always eager to serve.  He gave his life and expertise to the following efforts over his lifetime:

University of the Cumberlands Board of Trustees 1987-1995

In his free time, Arnold enjoyed traveling with Bev and their family, hunting, fishing and playing cards, especially Rook and Spades. He was extremely competitive at anything he put his hand to.

Arnold also dearly loved Gospel music.  So much so, that his sons secretly planned a private concert by David Phelps for Arnold & Beverly’s 50th wedding anniversary in 2014.  Beverly Caddell was a church pianist and organist for 57 years and Arnold enjoyed every measure of music she played during their marriage.

Of everything Arnold loved and led throughout his lifetime though, his family was of deepest importance to him.

Most importantly, Arnold’s deep faith as a follower of Jesus Christ was the common thread tying together his business interests, family life and friendships.  Regardless of the setting, everyone was aware of Arnold’s faith walk that he endeavored to live out every day of his life. He knew from scripture that God is literally love (1 John 4:7-8) and Arnold exhibited this love for God by being extremely generous not only with his time, but with his finances as well, always viewing everything he had as belonging to God for him to manage and leverage during his lifetime.

Arnold practiced and modeled extreme generosity, giving very quietly and anonymously behind the scenes to a multitude of churches, non-profit entities and struggling individuals & families so that God would be glorified, not himself.  He and Beverly both passed their passion for giving on to the future generations of the Caddell Family, ensuring that this legacy of giving will never die.  We will truly never know the exact impact of Arnold’s giving, but we are very confident that it is substantial and changed many, many lives in the process.

In Arnolds life like many of ours, there are key people that God places in your path to support your success and provide a “hand up” along the way.  The Caddell Family is forever grateful for men the likes of Mr. Dick Ammon, a lifetime advocate for Arnold providing support in gaining his job as Administrator of the Baptist Convalescent Center and significant personal financial support allowing Arnold the opportunity to pursue his first business interest in Bonanza Steakhouses.  Our family would look very different today had God not chosen to use these men to build into Arnold’s success.

In lieu of flowers, the Caddell Family has asked that you consider financial gifts to the following organizations that were meaningful to Arnold’s formation and future:

The Covington Education Foundation to fund education needs for students in the Covington School System.  (Arnold is an Alumni Hall of Fame Inductee)

Arnold became a friend some years ago and I so enjoyed the time in the home he and Beverly created. Their compassion, their faithfulness to Christ and his kingdom, and their family made life good. Now that Arnold is beyond this life in a new season of living we will miss him. However, his legacy will live on long after these moments of grief. He was truly a follower of Jesus in everything he did and a model for his sons, his grandchildren, and his great grandchildren. We are all blessed because of his faithful legacy.

With my deepest sympathy…

So blessed to have shared a few great memories with Mr. Arnold. Such a wonderful man, he always made my kids and I feel welcome whenever we were around! Fun times at the Boone County Fair, extending his front row seat to watch the Fireworks at the festival, inviting our church small group over to his house so all the kids could fish, taking my kids along with Casey and Cameron sled riding on his Gator! He was there for me through a very hard time in my life, reassuring me that things would be Ok. The Caddells are very special, and have always been like family to me. I pray for God to wrap his arms around this wonderful family and give them peace and comfort in the days ahead.